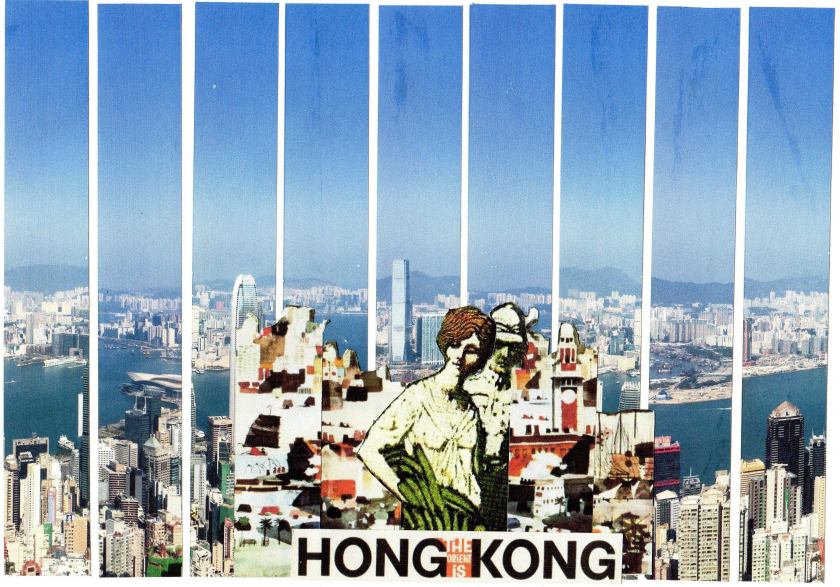 Words and Art by Claudia Thomson

Scouring the beach-house bookcase this summer, I was instinctively drawn towards a familiar name inscribed on the front cover of an unfamiliar text. Decidedly unforgiving of society’s misconducts, George Orwell’s denunciation of all that is wrong with the world has had a long-lasting impact on my own moral code. As a result, it comes as unsurprising that his scathing critique of British imperialism in Burmese Days resonated strongly with me, and clearly, the novel remains relevant even eighty years after its initial publication.

While I read, I found myself reflecting on my own expatriate experience growing up in Hong Kong, a former British colony, and was continually made to ask: “Has anything really changed?”

Of course, we’d all like to distance ourselves from Orwell’s character of Elizabeth, whose dichotomous and racist worldview of “lovely” or “ghastly” experiences, behaviors and people shockingly corresponds with those that are “White” and decent, or “Non-White” and disgusting. While such xenophobic segregations may not be immediately identifiable in contemporary societies today, it is impossible to analyze the situation in Hong Kong currently without taking the aftershocks of its colonial past into consideration.

In the period prior to the 1984 Sino-British agreement (that signified the technical end of British colonialism) the elite White constituent in Hong Kong very much set itself apart from local Hong Kongers, choosing to remain culturally, linguistically and socially separate. This subversive separation brought with it a distinct set of privileges, that were obviously only accessible by the white community.

So, with over 7 million people from around the world enjoying one of Asia’s highest standards of living, why is this relevant?

Hong Kong has changed almost immeasurably in the twenty-one years since its retrogression to Chinese sovereignty in 1997; but despite this, a pervasive sense of the disunion between (white) expatriates and local Hong Kongers still remains.

My parents immigrated to Hong Kong from Australia in 1994, and I spent the entirety of my schooling life in British international schools. While I was at school, I felt so fortunate to have friends from a huge variety of different cultures and backgrounds, but it wasn’t until I left Hong Kong for university in Sydney that I realized just how insular these international school circuits really are.

In Burmese Days, Orwell’s most biting indictments of imperialism are reflected in the discourses overheard at the White-only Kyauktada Club. Within the novel, the Club represents a disillusioned remnant of British power, where the bigoted (and predominantly male) members frequently direct malicious and prejudiced expletives, “You damned, dirty little n******!” towards the native Burmese, creating a microcosm for the systemic abuses of colonization throughout the British Empire. While I read these seemingly endless passages of intolerant dialogue, I couldn’t help but compare the chauvinistic Kyauktada Club to my very own ‘International School Club’, of which I am a lifetime member. It wasn’t difficult to observe the consistency of the colonial condition, between 1930s Burma (now Myanmar) and 2018 Hong Kong, as inherent privileges and a bottomless disposable income also characterize the vast majority of international school kids.

Within weeks of arriving in Sydney, I found myself repeatedly ensnared in the same conversation, where I’d have to recount my upbringing to almost everyone I met. I soon realized that I didn’t feel quite like an Aussie, having never lived here before, and was feeling less and less like a Hong Konger with every time I’d sheepishly admit that “Ah…no. I don’t speak any Cantonese.” It was only with being exposed to an extreme example of the colonial status quo in Orwell’s Burmese Days, that I realized I am intrinsically a part of a colonial legacy as a ‘third culture kid’ who has never made the effort to assimilate into the local culture that I call home.

Over eighty years ago, Orwell rejected his own expatriate upbringing, voicing his condemnation of the British Empire through the character of Mr. Flory, who struggles to mediate his Anglo-Burmese identity with the part he plays in sustaining British imperial rule. While Flory’s plight in some ways mirrors my own identity crisis, I also can’t deny the fact that each time I disembark in Hong Kong, I find myself enveloped in a wave of nostalgia and belonging – a feeling I’m certain can only be brought about by the unique experience of returning home.

The ramifications of colonization are undeniably both pervasive and problematic, and it’s certainly not enough to just recognize my privilege. Ultimately, I believe that expatriates in Hong Kong still have a long way to go before we’re able to counter the current ‘Expat Brat’ culture of intolerance, and ignorance when it comes to truly acknowledging our problematic roots in Hong Kong.